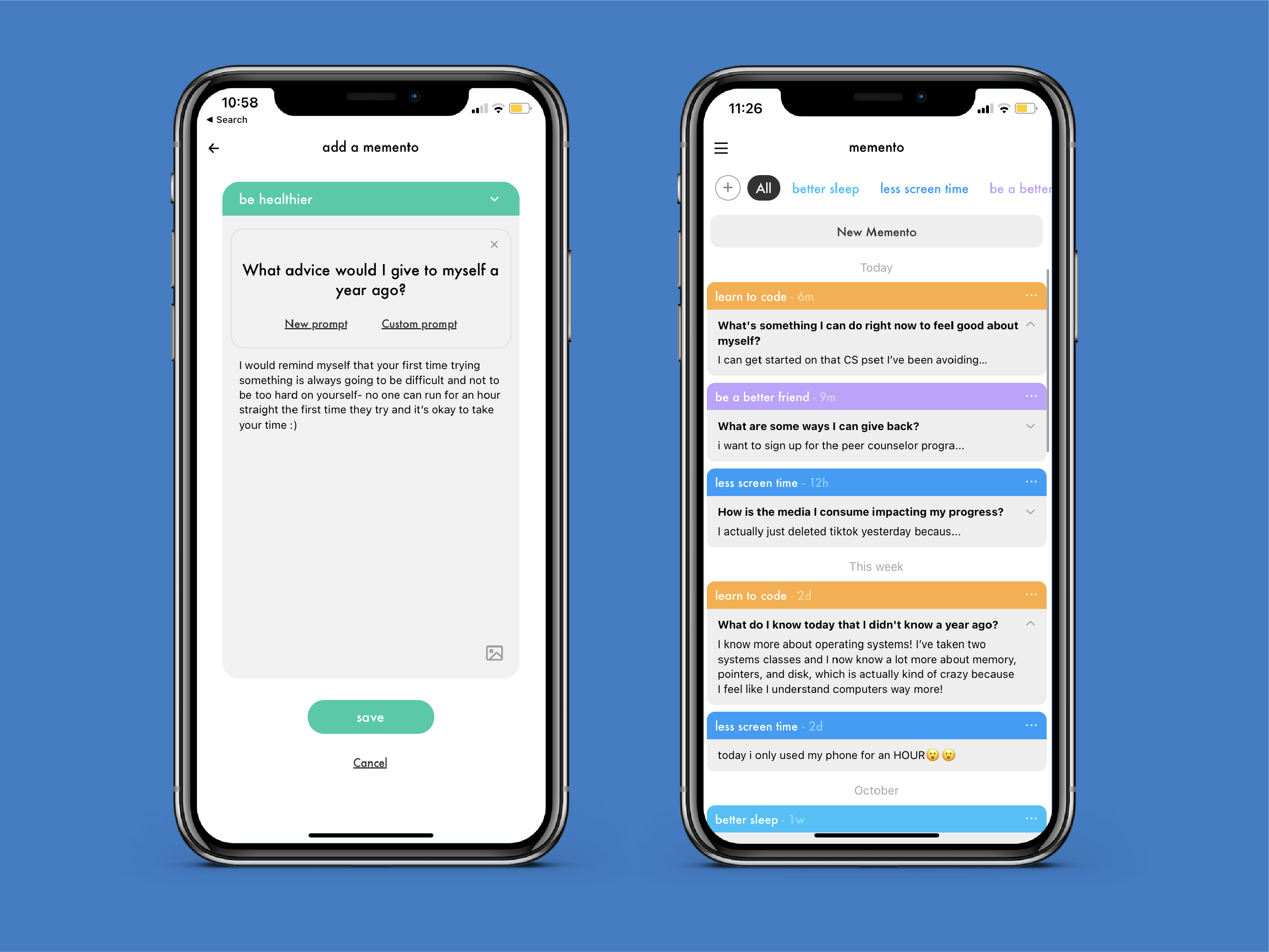 The constant stimulation of modern life makes it difficult for us to set goals with intention and make meaningful memories. Memento offers users a solution that isn't focused on productivity and task completion, but rather provides a space for growth and reflection.

Memento helps us to shift focus away from quantified goals and external validation, helping us to set growth-oriented goals and encouraging us to reflect along the way to orient us in our journeys.

I created this app alongside a group of 3 other students, winning an award for achievement in the category of "Behavior Change for Everyday Life." Following the completion of the course, I returned to the project in my own time to redesign the interface and to implement extended features. 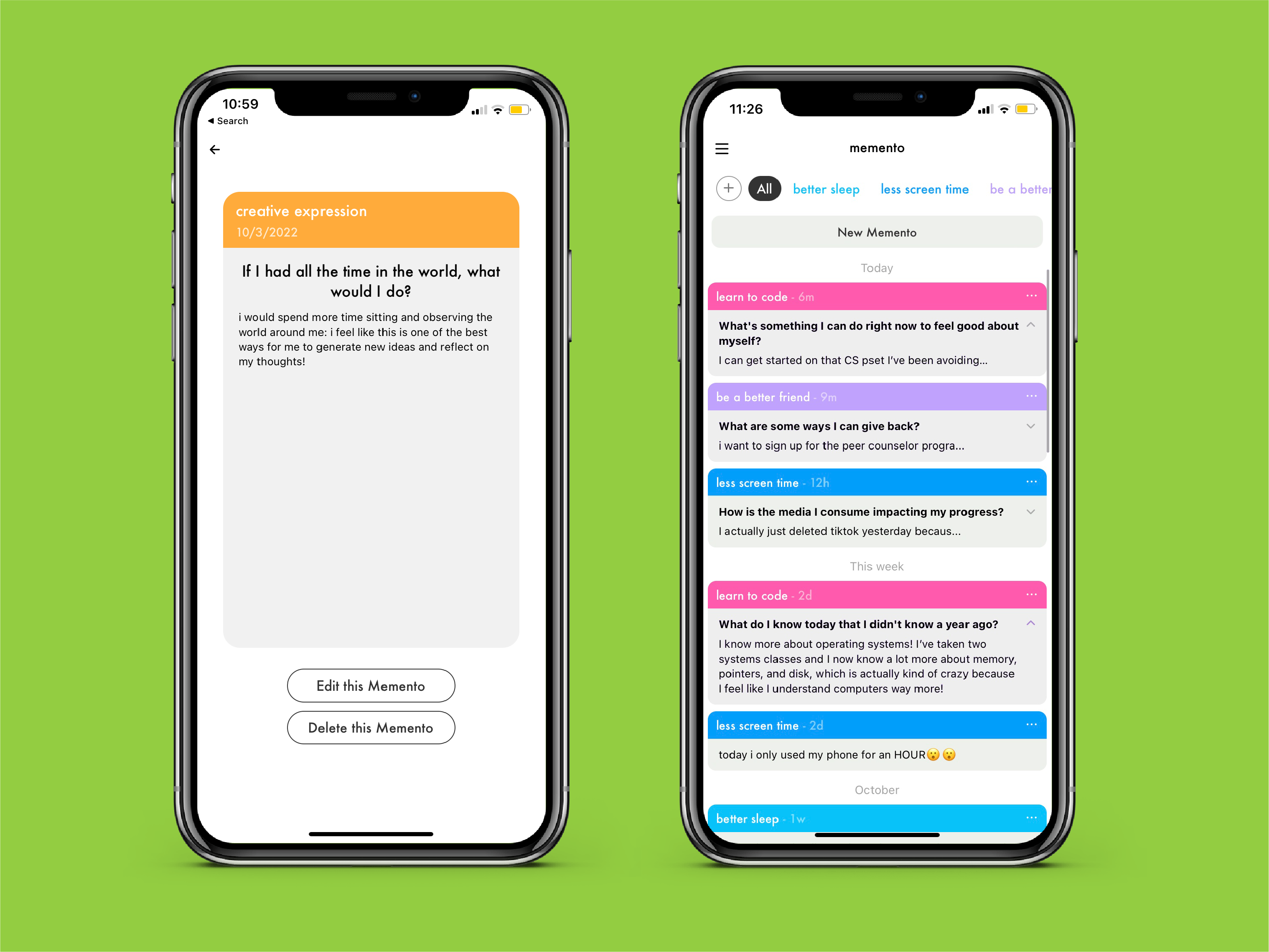 We began by interviewing a wide variety of people about their daily habits, then pulled out any surprises, harmonies, and tensions to reveal the problem space.

“Staying busy actually makes it easier to be productive.”

“Part of my self worth is based on productivity; I don't know if that's an internal or external force.”

"Much of my past failure was due to me focusing too much on what was out of my control."

"Power in the 21st century is knowing what to ignore."

Our interviews helped us realize the importance of the dynamic between actual productivity and self-perceived productivity, allowing us to narrow our POV to address people struggling with feelings of aimlessness and lack of control when targeting long-term emotional goals.

Next, we used generated a selection of "How Might We" statements that helped us to better frame our problem space:

How might we decrease people's reliance on external motivation through contextualization?

How might we help people to better focus on what's in their control rather than what's out of it?

How might we shift focus to HOW to achieve a goal rather than WHEN to achieve it?

To test our hypotheses, we asked participants to engage in a variety of experience prototypes and collected some key insights to inform what kind of experience we wanted to provide for users:

Finally, as we set out towards our final product, we defined three key tasks that we wanted our product to achieve, using these as our guideposts through prototyping. Notably, we wanted our users to be able to...

We want to help users set goals that weren't completion-oriented.

We want to help users contextualize their achievements and shift focus away from stressful lists of everything they still have to do.

We want to help users center gratitude and reflection to improve self-perception and general optimism.

These goals became the driving forces in developing task flows in our first low-fidelity prototype, drawn by hand and roughly prototyped in Figma. In this prototype, we generated the key in-app vocabulary of visions (long-term goals) and mementos (individual "posts" tracking progress within a vision). 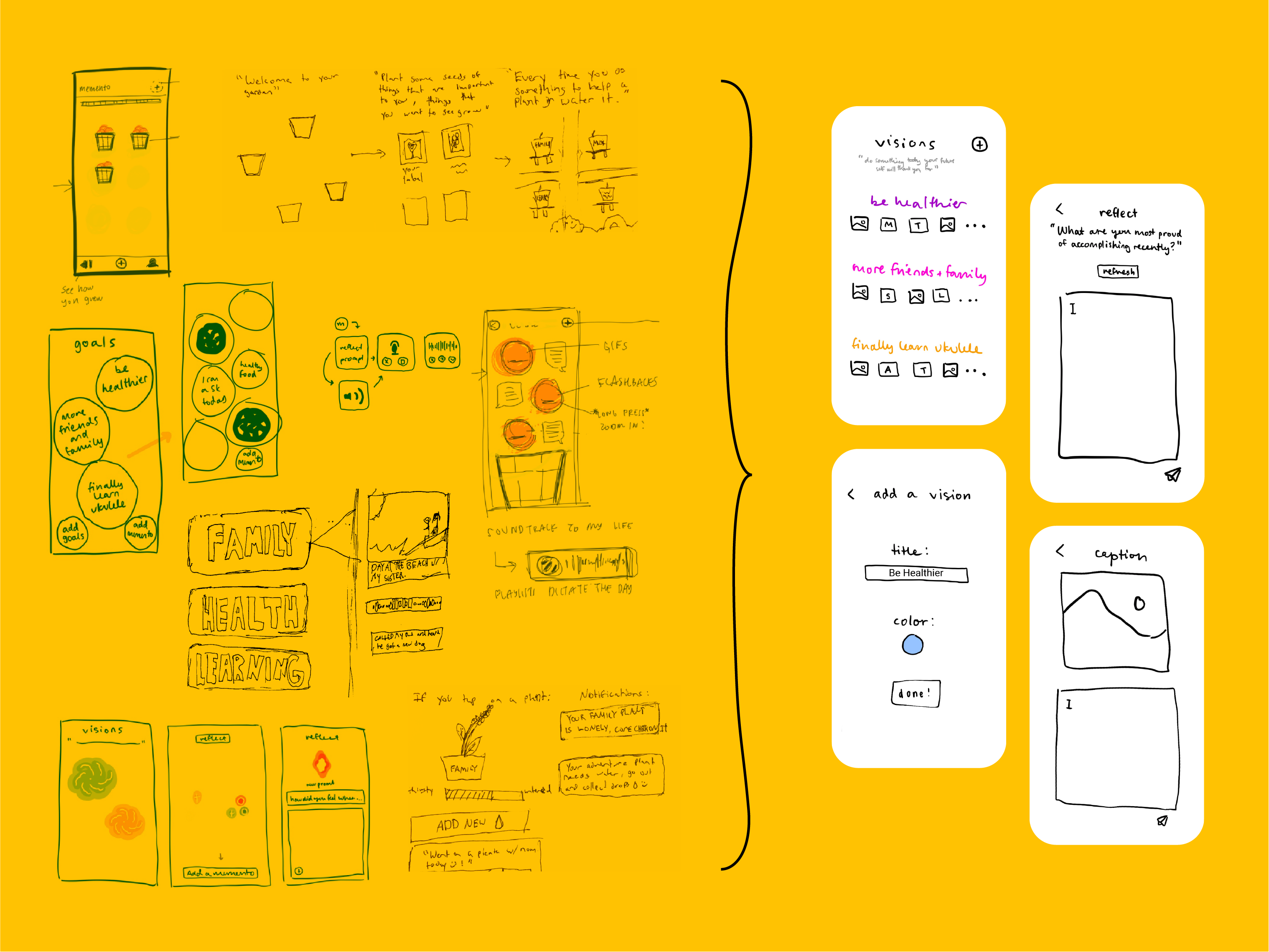 We began with broad brainstorms, going wide and incorporating fun potential themes like plants and galaxies before narrowing in.

In the end, we decided to go with an interface that would be most familiar to users: a feed populated with tidbits to help ground users in their goals. From here, we created potential task flows in our low-fi prototype.

As we moved on to the medium-fidelity prototype, again developed in Figma, we conducted user testing to identify friction points in the low-fidelity UI and used this streamline our user task flows.

Notable changes included allowing users to view all their mementos at once, adding colors to distinguish between visions, combining the "reflect" and "new memento" button into one floating button that can be accessed right away from the home screen, and adding a tab for users to favorite their most important mementos. 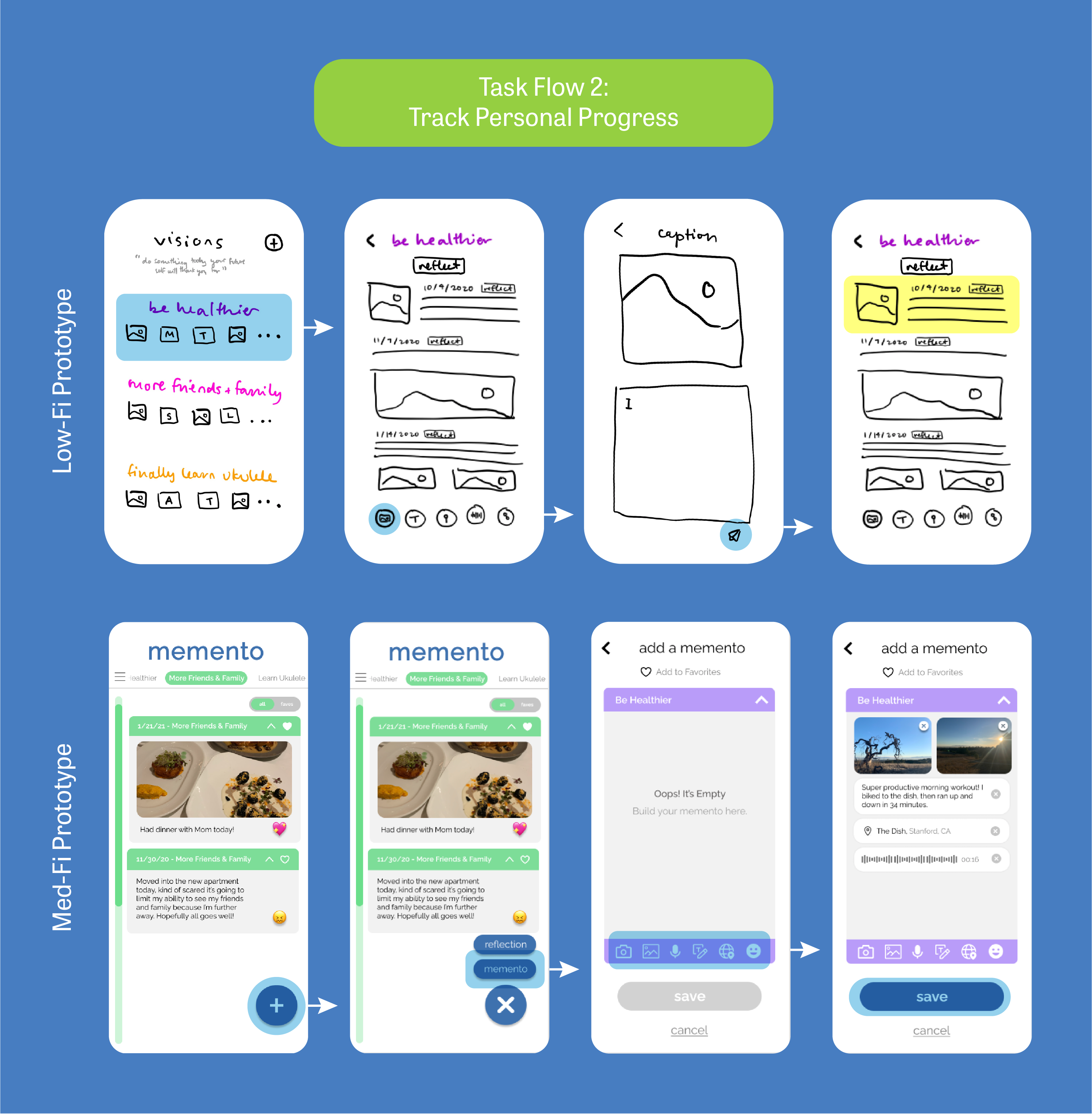 My group presented our prototype at the class expo for CS 147, winning an award for achievement in our category of behavior change for everyday life.

After finishing the course, I returned to the project alone to redesign the interface and strengthen my front end development skills by fully implementing the app. While we had a rough skeleton in React Native with some of the basic pages set up, the aesthetics and functionality were far from complete.

I developed in React Native and Expo, adding Firebase for cloud storage, and continued adjusting the UI design based on usability heuristics. I identified some key design changes and additional features and worked methodically to bring our prototype to life!
‍

Combining reflections and mementos into one singular task flow

Support for editing vision colors and titles and for archiving, unarchiving, and deleting visions

We encourage users to add thoughtful reflection prompts to deepen engagement with their goals and foster internal motivation.

Users can customize vision names and colors to give them full flexibility and control over how the app appears.

Users can customize vision names and colors to give them full flexibility and control over how the app appears.

Later, users can edit both visions and mementos so they can curate their journey in the app. Visions can be archived or deleted if users want to take a break from a certain goal and return later. 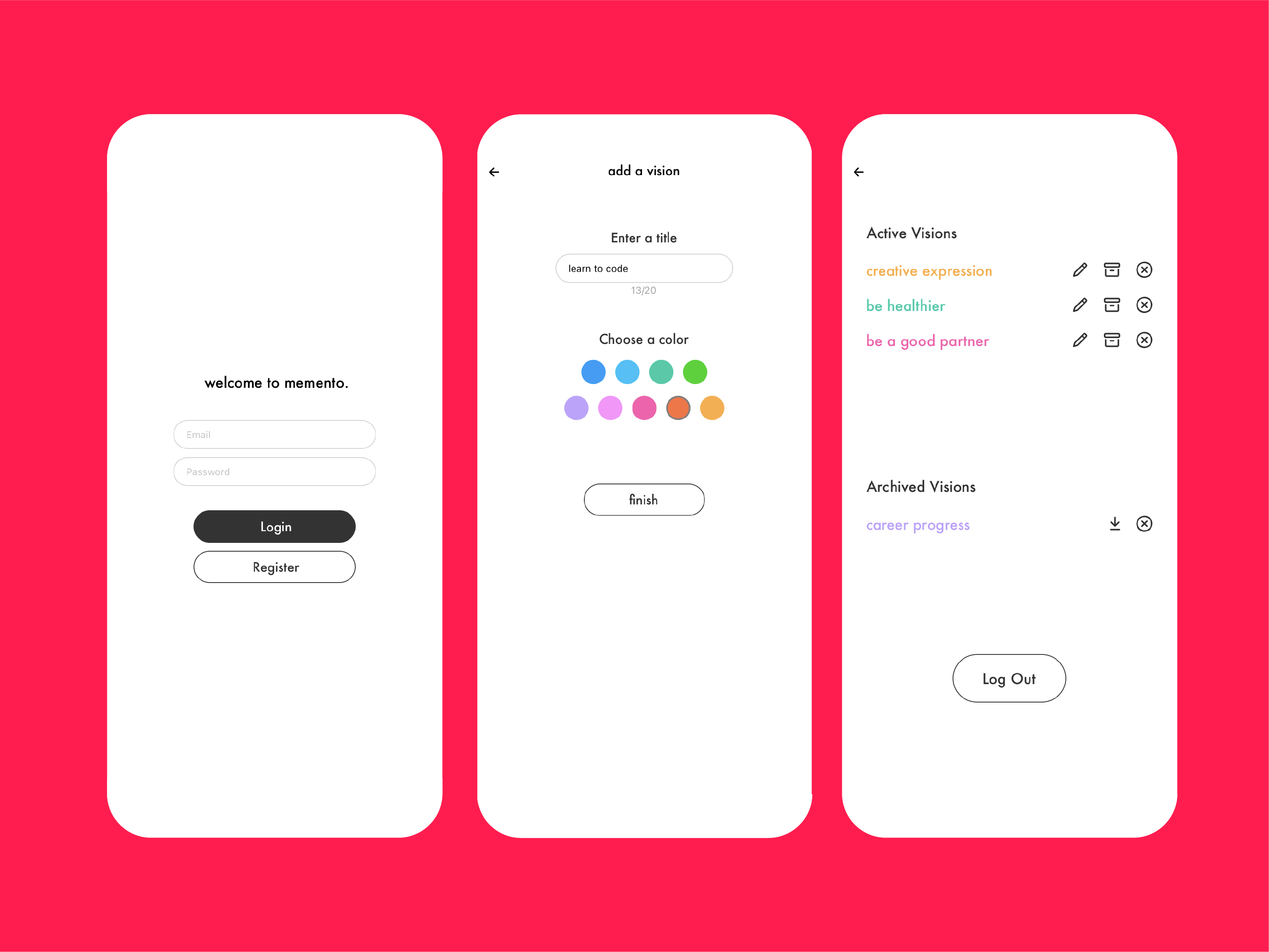